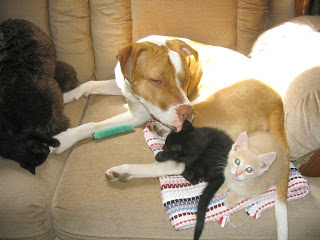 To the left is our dog Ginger with the kittens. Ginger was a wonderful mother to the cats. She was so gentle with them (and protective. She keeps Schubert away from any of the new cats. Which is probably a good thing!) Ginger is a pit bull and Ginger would lick the kittens and put their heads in her mouth without hurting them at all. She would curl up and sleep with them and play with them. I've never known a dog as gentle as Ginger.

Today we went to "Pit Bull Awareness Day" at the Butte Humane Society. I know this is one of those sort of "oh, well, good for you. Sounds like that was fun. Wish you would have told us about it beforehand and maybe some of us could have gone" sort of thing. Well observed, but first of all any opportunity to give press to the Butte Humane Society is a fine opportunity to seize in my opinion. They are a low kill shelter (which means they don't euthanize unless there are extreme health or behavioral problems. If you take an animal there, they will pretty much stay there until they find a good home.) They do cheap adoptions, fixings and they outsource affordable shots. Both of our dogs come from there. If I suddenly inherited millions I would dump a bunch 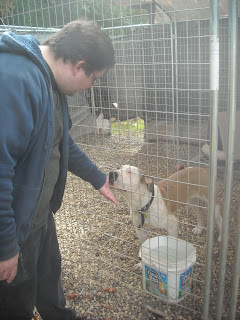 of it on the Humane Society.

So, on top of this they do this Pit Bull awareness day. First of all, they have kind of a pet supply yard sale and we were able to get a covered cat box for six bucks. Then they have a pit bull puppy petting tent, a big information table, discounted adoptions, and a kissing booth with a very handsome pit bull there.

We don't have a television and we listen to NPR so we haven't been carefully taught the disinformation that flows freely out there about pit bulls. The television lies and sensationalizes for a living. It keeps people watching, keeps the bills paid. Of course, it's not good in any way. But it's easy. Fear is an easy response button to keep pushing. Some people make a living finding things to fear monger about every day. No matter who they destroy in the process.

Pit bulls are not naturally a 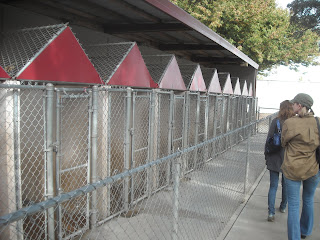 ggressive, they don't just one day turn on their owners, they aren't wicked and mean. In fact with responsible owners they are a very sweet and loving breed. They are very conscientious and they want their owner to be pleased with them. They are extremely loyal. They are highly trainable as well. They are very alert. These personality traits mixed with their strong jaws is part of why people who train them to fight are so evil. Such a betrayal and such a lack of any basic decency. They are no more aggressive than beagles or golden retrievers. I remember when I was younger, dobermans had the rap that pit bulls seem to have. Rottweilers had the same reputation for a while. This should send off a few red flags that you may be being fed a line of... bull.
Totally no pun intended there. I came to the end of the sentence and there it was.

Pit Bulls used to be the "All American Breed of Dog" around the first world war. You'll remember the one from the Little Rascals. Woodrow Wilson and Teddy Roosevelt each had one as did Fred Astaire, Fatty Arbuckle, and Sir Walter Scott. They were the most decorated hero dog in WWI.

Ira Glass has one. Need I say more.

Having Ginger, my whole family are staunch pit bull supporters. I should probably warn you, we tend to get a little agitated when people spread the mis-informed fearspeak about pit bulls. Especially Gina.

People love themselves some fear though. In my experience, people grab into whatever fear possibility is fed them and lock their jaws onto it. 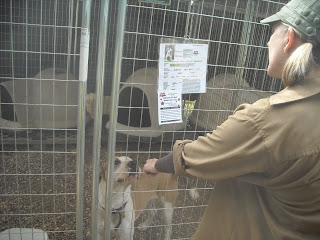 Pit bulls do not have locking jaws by the way. They have the same anatomy as other dogs. I only have to say "no" once to Ginger and she lets go of her chew toy when we are playing catch. She is trained and she is loved.

The truth is they are wonderful dogs and people are the monsters.

I'm sure with the cultural climate as it is there are violence pervs who may not admit it, but who on some level actually want to see a baby attacked by a vicious pit bull if for no other reason than to prove their fears right. Doubtless some knucklehead out there is going to feel the need to say "You know whut, you don't know nothin'. 'Cause I saw dis story on Inside Edition where they said pit bulls are bad!" To those, here you go. Here's a video: 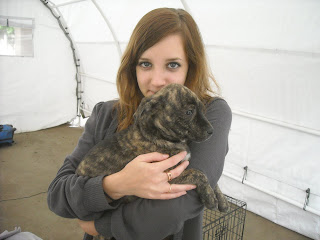 To the left is a picture of Gina with a pit bull puppy.
Here's a good website with some more information.
If you're looking for a dog, think about a pit bull. They are wonderful dogs and they live in a time and place where they could use a lot more good homes, good owners, and rescuing.

Much like the grossly irresponsible anti-vaccine hysteria, part of the reason this is an important issue to me is that it is one of the issues where the culture of fear can actually kill. Much like refusing 'flu shots put severe asthmatics like me at risk in the world, the "monster breed" myth puts the lives of some very lovely dogs at risk for euthanization and for terrible people to continue the inhuman culture of dog fighting.

Wow, I meant to write an entry on our day at the humane society. I guess I had some things I wanted to get off my chest.
Posted by Paul Mathers at 4:47 PM